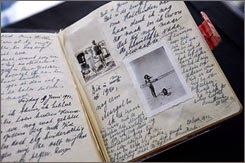 At the end of the school year, in May, my eighth grade literature class read the play The Diary of Anne Frank. We then watched the Masterpiece Classic adaptation of this work written by a 13-year-old girl that has sold over 30 million copies. After the movie, I asked the class how they felt about Anne and her story.

"It's sad" was the prevailing response.

"Because she died," answered a student in the back row.

"Yes, she did," I answered. "But people die every day and we aren't saddened by this. Why does Anne's story make us so sad?"

"Because she was young. Because she shouldn't have died and she did. It's not fair."

The words were spoken by a boy who has been quiet and withdrawn for much of the year. I looked at him and could tell from his earnest expression that this mattered to him. His earnestness moved me so much I nearly cried in front of 24 eighth graders.

Now, as I'm writing those words, a new picture comes to mind. A picture of a Nigerian mother wailing over her daughter who has been abducted and has been or will be added to the hoards of children being sold as slaves around the world. (Kristen Howerton of Rage Against the Minivan does an amazing job of explaining and contextualizing this tragic event.) What, you may ask, do Anne Frank and a Nigerian school girl have in common?

Their lives matter. Their stories matter.

And they MUST matter to us. Anne's earthly story has come to its conclusion. These school girls abducted in Nigeria still have their stories stretching before them. What will be written? Will their stories say that those watching from afar sat around shaking their heads sadly saying "what a shame" and doing nothing?

I've seen many articles and posts written as a shaking fist toward our president, our government, and other world officials. Yes, political action needs taken, but most of us cannot force political or military action. (Although military action leaves me uneasy. I'm not sure American troops storming into Nigeria will actually solve any problems. From what I've read it could potentially exacerbate the atrocities happening to innocent people.)

Still, our limitations sitting on this side of the Atlantic doesn't give the us an "out". We may not have the resources or revenue, but we have a mind. And we have a voice.

Educate yourself. Then speak out.

There's a huge social networking movement to bring attention to these girls in Nigeria that the media has done its darnedest to ignore. Look at #BringBackOurGirls on Twitter. Read some of what's going on there. Get involved. Talk to people.

Pray for the girls, their families, their captors (gasp!), Nigeria, Africa.

It may not seem like much, but it's something. It's a start. It's more than clucking your tongue and going about business as usual. Edmund Burke once said, "The only thing necessary for the triumph of evil is that good men do nothing." Don't do nothing.
Posted by Anna Urquhart

Email ThisBlogThis!Share to TwitterShare to FacebookShare to Pinterest
Labels: Anne Frank, Bring Back Our Girls, Nigeria, perspective, Prayer, The Diary of Anne Frank