Where have all the Ben Franklins Gone? 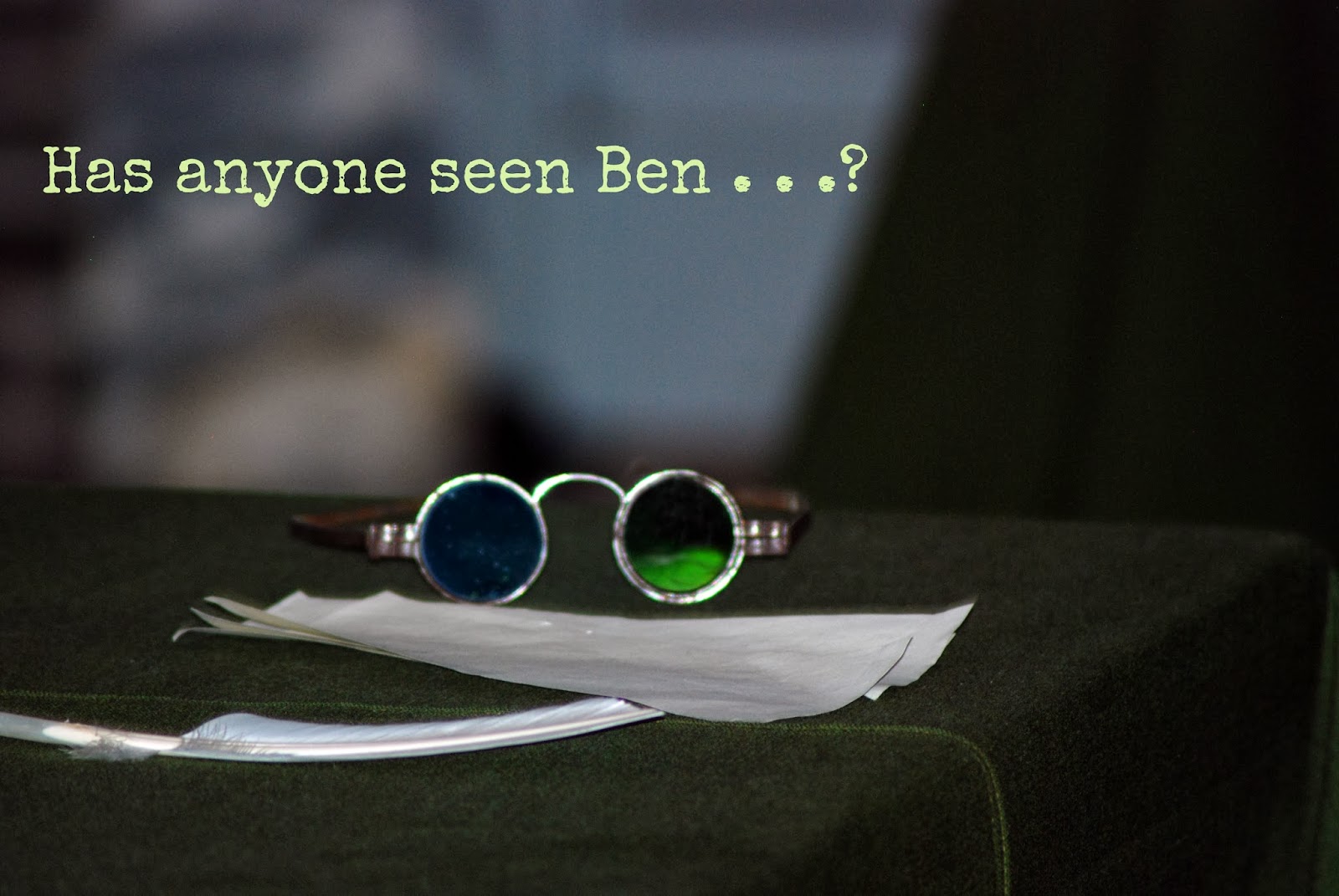 There is a reason that in "polite" society you don't bring up politics and religion. Two subjects so tetchy that maelstroms of verbiage and wrath are wrought at the mere mention of them. And I like to think that, here on the Isle, we are all of that "polite" society where we can co-exist peacefully despite our many differences. In fact, I believe we can co-exist peacefully because, well, we have. I know many of you do not share my political bent nor Christian beliefs. That is A-okay. Our common ground can simply be a mutual respect for each other. I make it a goal to always take each person as I find them, and hope that others will do the same for me. (Because, let's face it, I'm not always a picnic.)

Speaking of not being a picnic, I want to fix our gaze on our nation's capital. Just for a moment. As I said, I don't want to dredge up a bunch of politics because 1) I want to be polite toward and respectful of others, 2) I haven't the energy to deal with the convoluted insanity it has become, and 3) it makes me nauseous.

However, I'm going to sidle up to the border of impolite conversation and broach the topic of politics because I happened upon an epiphanal moment while teaching today.

In my American Literature class, I teach some of the literature created during America's Revolutionary Era. I always get a little misty reading the powerful words of Patrick Henry's "Speech in the Virginia Convention" and Thomas Paine's "The Crisis." (Whatever your feelings toward these men's personal lives and affinities, there's no denying the conviction, vision, and power behind their words.) As a class we read and dissect the charged language of The Declaration of Independence, a document written by men daring to defy a world power they had little hope of defeating. They signed the page believing that it would result in their own (very painful) deaths. Ah, even now goose bumps are starting to form. It was indeed an age of revolution.

Yet, more importantly, it was also considered the Age of Reason.

The wording of the Declaration alone bespeaks the reasonableness and pragmatism with which these men--and, by extension, our country--entered into the task of revolution. Revolutionary, yes. Reactionary, no. Reasonable, in every sense of the word!

Why is this significant, you ask? Because we have, in our country, reached an Age of Unreason. A moment of hurling the pendulum so far opposite from where our country's government began that we are on our ear. It is an age where appointed and elected officials who supposedly represent the people have sacrificed their reason to politically empty rhetoric and posturing. Each side sits in their foxholes and pigeonholes, focus-grouping their next move that will put their adversaries to shame while hoping to add a spit-and-shine to their own shabby reputations. It's not about the good of the American people anymore. It's about which party is in the "right," which party comes out with the least amount of poo spattered on them, which party gets to have their own way. And, as a result, everybody loses. (And, incidentally, everybody starts smelling like poo.)

Are all politicians unreasonable? No. But the group dynamics (basic social psychology, people) in our governmental system are creating serious problems. Has this happened before? Yes. Will it happen again? Probably. But at this moment in time, Revolutionary Spirit has married Reactionary Decisions and given birth to the offspring of Chaos, Stalemate, and Disillusionment. (Come on, Revolutionary Spirit! Divorce stupid Mr. Reactionary, he has been unfaithful to you! Marry Common Sense instead!)

This reminds me of a "lesser known" speech (I'm using the term "lesser known" loosely) given by Benjamin Franklin to the Constitutional Convention that convened in Philadelphia and wrangled over the Constitution of the United States. Franklin, if nothing else, was pragmatic. He had a somewhat cynical view of the convention (and humanity itself, it would seem), feeling that this group of our country's first politicians would be tainted by the passions, proclivities, and personal agendas of those gathered, himself included. However, he finally wrote a speech that had to be read for him because of his weak condition. It was presented on the final day of the convention, and I am always amazed at the leveled reasonableness and humility, even, of his words. Take a minute and read it. I've included below the entire speech because I think it's worth reading:


Mr. President
I confess that there are several parts of this constitution which I do not at present approve, but I am not sure I shall never approve them: For having lived long, I have experienced many instances of being obliged by better information, or fuller consideration, to change opinions even on important subjects, which I once thought right, but found to be otherwise. It is therefore that the older I grow, the more apt I am to doubt my own judgment, and to pay more respect to the judgment of others. Most men indeed as well as most sects in Religion, think themselves in possession of all truth, and that wherever others differ from them it is so far error. Steele a Protestant in a Dedication tells the Pope, that the only difference between our Churches in their opinions of the certainty of their doctrines is, the Church of Rome is infallible and the Church of England is never in the wrong. But though many private persons think almost as highly of their own infallibility as of that of their sect, few express it so naturally as a certain french lady, who in a dispute with her sister, said "I don't know how it happens, Sister but I meet with no body but myself, that's always in the right — Il n'y a que moi qui a toujours raison."
In these sentiments, Sir, I agree to this Constitution with all its faults, if they are such; because I think a general Government necessary for us, and there is no form of Government but what may be a blessing to the people if well administered, and believe farther that this is likely to be well administered for a course of years, and can only end in Despotism, as other forms have done before it, when the people shall become so corrupted as to need despotic Government, being incapable of any other. I doubt too whether any other Convention we can obtain, may be able to make a better Constitution. For when you assemble a number of men to have the advantage of their joint wisdom, you inevitably assemble with those men, all their prejudices, their passions, their errors of opinion, their local interests, and their selfish views. From such an assembly can a perfect production be expected? It therefore astonishes me, Sir, to find this system approaching so near to perfection as it does; and I think it will astonish our enemies, who are waiting with confidence to hear that our councils are confounded like those of the Builders of Babel; and that our States are on the point of separation, only to meet hereafter for the purpose of cutting one another's throats. Thus I consent, Sir, to this Constitution because I expect no better, and because I am not sure, that it is not the best. The opinions I have had of its errors, I sacrifice to the public good. I have never whispered a syllable of them abroad. Within these walls they were born, and here they shall die. If every one of us in returning to our Constituents were to report the objections he has had to it, and endeavor to gain partizans in support of them, we might prevent its being generally received, and thereby lose all the salutary effects & great advantages resulting naturally in our favor among foreign Nations as well as among ourselves, from our real or apparent unanimity. Much of the strength & efficiency of any Government in procuring and securing happiness to the people, depends, on opinion, on the general opinion of the goodness of the Government, as well as of the wisdom and integrity of its Governors. I hope therefore that for our own sakes as a part of the people, and for the sake of posterity, we shall act heartily and unanimously in recommending this Constitution (if approved by Congress & confirmed by the Conventions) wherever our influence may extend, and turn our future thoughts & endeavors to the means of having it well administred.
On the whole, Sir, I can not help expressing a wish that every member of the Convention who may still have objections to it, would with me, on this occasion doubt a little of his own infallibility, and to make manifest our unanimity, put his name to this instrument.  (emphasis mine)
So I look at Washington and ask: Where have all the Ben Franklins gone? Men and women who "doubt a little of [their] own infallibility" and make sacrifices for the "public good"? (There were founding fathers who bankrupted themselves in an effort to help fund the newly born treasury--clearly those days are LONG gone!) Oh, there are too few of the Reasonable left to speak. And, until some more Ben Franklins start to appear, I don't see things changing any time soon. So until that day when Chaos, Stalemate, and Disillusionment are reined in and rehabilitated, let us all be a little kinder, a little gentler with our words. May we as citizens and patriots display a bit more of the wisdom and integrity that our politicians seem to lack. And, when nausea and frustration set in, may our mutual respect for each other be the order of the day.