A Hero In Our Midst

Today, during my free period, the Freshman history class had a guest speaker. An invitation was extended to any faculty who wished to come and listen to this man talk about his WWII experience. So, ignoring my screaming pile of grading, I saunter to the classroom next door.

Clarence R. Hibbs, grandfather of faculty member Lincoln Hokenbrough, stands quietly at the front of the classroom surrounded by desks filled with gazing students. After Lincoln offers a few words by way of introduction, Clarence begins at the beginning—the moment he heard that Pearl Harbor had been attacked. He describes the rationing of sugar, gasoline, car tires. He recounts the mobilization of the country—the flooding of housewives and mothers into the workforce. Then, in 1944, at age 18, he was drafted into World War II.  He requested to be a medic rather than infantryman, stating he didn’t think he could bring himself to shoot another human being. However, his request was denied, and he was sent into the 9th Infantry Division. After 17 weeks of training he was sent through U-boat infested waters to the shores of La Havre, France. They slept their first night in France in a bombed out German bunker, shivering from cold as it was the bitterest winter Europe had seen in 40 years. From there, still without weapons, they were herded onto boxcars and shipped to the Battle of the Bulge.

Indeed so cold that, when the train stopped at a small French depot, Clarence and his buddies “liberated” (Clarence’s word) a small wood-burning stove from a Frenchman there. They loaded the stove into their boxcar, stuck the smokestack out the boxcar door, and soon reaped a harvest of warmth. However, the stove got so hot it started blowing smoke, ash, and flame down into the rest of the boxcars, so that their commanding officer stopped the train, screamed at them “with language I had never heard before” for nearly lighting the whole train on fire. They were made to get rid of the stove—which was quite the undertaking as the stove was red-hot and couldn’t be touched, let alone moved.

Clarence tells of his frost-bitten feet. “Some men had to have their feet amputated. Mine,” he shifts his weight, “just seemed to get better after awhile.”

He speaks with tears and a strained voice of his friend Tex (yes, from Texas) who was hit by a mortar shell and killed.

“I won’t tell you what he looked like,” he says of Tex’s body after the mortar hit him. “I can’t tell you.”

And then he starts to sing. He is reluctant at first, admitting he’s not much of a singer. But with a nudge from his wife who sits off to the side, he sings a song his friend Tex sang one night with a guitar he found amongst some abandoned belongings. A song about a soldier writing a letter home to his mom; and about the mother who, as she reads it, realizes her son won’t be coming home from war.

The final notes of the song fade. The room is silent. 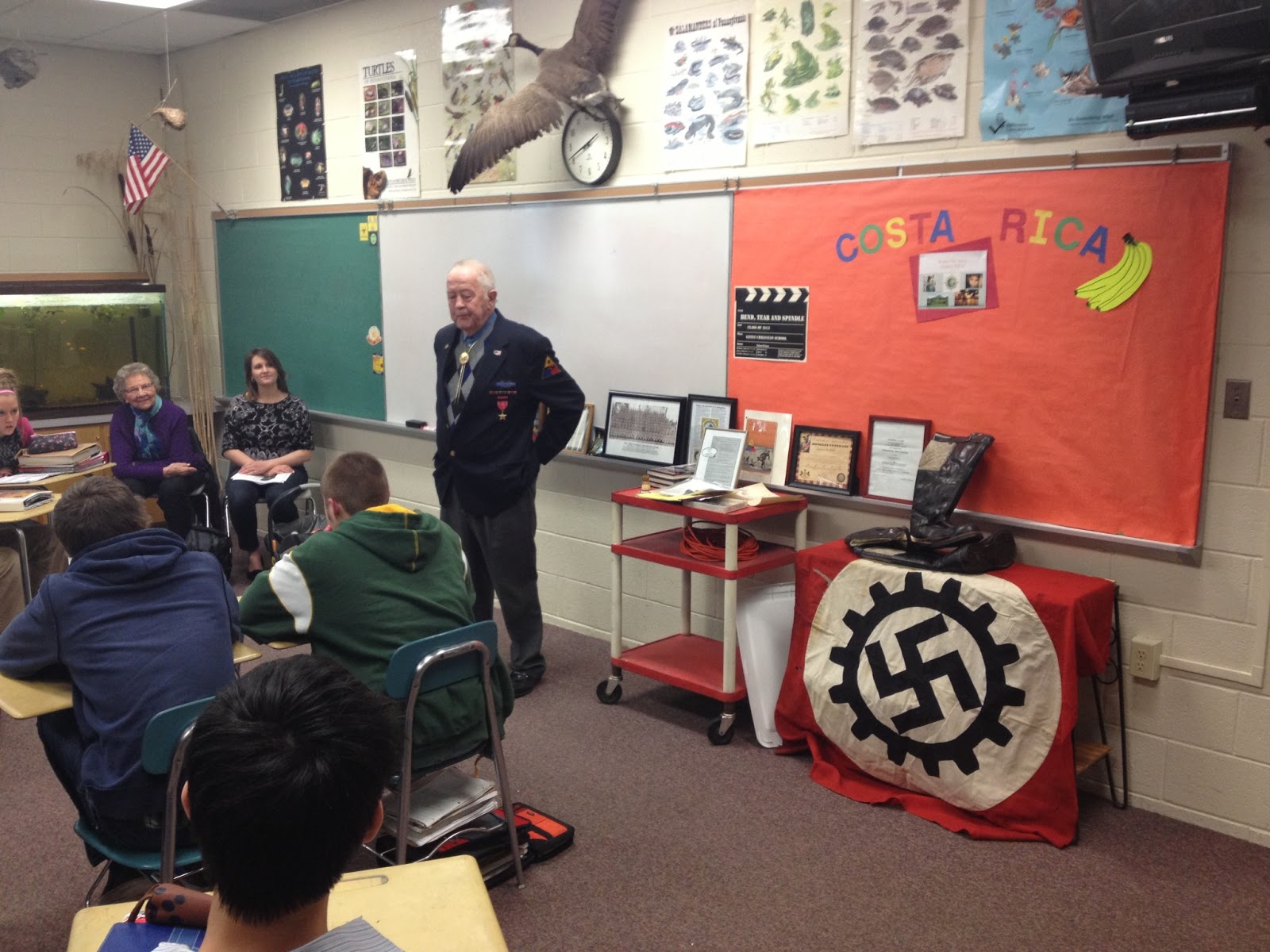 Clarence with his awards and a Nazi flag he acquired during the war.

“So now you know I can’t sing,” he says with a chuckle. We all chuckle, relieved to laugh.

Clarence then picks up a small trinket on the table next to him. “Anyone know what this is?” He lifts it up for the students to see. It is what looks to be a small, round wooden handle with a short shock of stubby bristles. “When Tex died they said we had to go through his pack so they could send home his belongings. This was his shaving brush.” His voice shakes. He stops and stares at the floor for several seconds before continuing. “I used this brush to shave up until only a few years ago when my wife bought me a new one.” Again, there is a sound of tears in his voice.

He is 87 years old. For the past 65 years or so, he has used that shaving brush, each time allowing himself a moment to remember his friend Tex.

When asked what advice he has to offer from his experience to this classroom of students, he says, “Freedom isn’t free. War and killing, it doesn’t make a lot of sense . . . But someone had to stop Hitler. So we did.”

Clarence and his division were the first division to cross the Rhine River in Germany. They witnessed the liberation of a Czech concentration camp. They were awarded medals and Presidential recognition for their many feats of valor.

Clarence is a hero.

Yet he seems to have a distaste for calling himself that, saying the heroes are the ones who died, like Tex. Still, I—along with so many others—must insist. Clarence is a hero, not just for his valor, for his determination, for the sacrifices he made for the freedom of this country—though these are truly heroic. Yet his heroism is further displayed because he is standing in front of a classroom of students and telling his story—no matter how much it hurts in the retelling. He speaks so that Tex is honored. He speaks so that this dark moment in history is remembered. He speaks so that the cost of freedom is understood.

So while you may resist the title of hero, Clarence, I hope you will accept my thanks. Thank you for honoring your country. Thank you for defending freedom. Thank you for paying tribute to the fallen. And thank you for having the courage to tell your story. You are an example to us all. 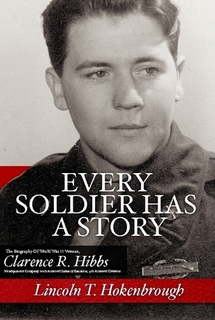 If you want to read the full story of Clarence R. Hibbs, you can! Lincoln Hokenbrough, Clarence's grandson, has recently published Clarence's account in Every Soldier Has A Story. If you wish to purchase a copy, just click on the link below.
http://www.lulu.com/shop/lincoln-hokenbrough/every-soldier-has-a-story/hardcover/product-20655718.html