On Saying "Yes" and "No" and Being Brave 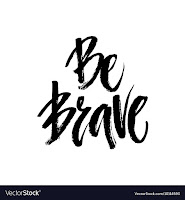 It is the holiday season and there are so many messages being delivered about goals and resolutions for the new year. Just today I read two different articles--one on the freedom of saying "no" and one on the power of saying "yes". It leaves me pondering. And it's the time of year I like to ponder (even though my pondering-time is limited). Here is my ponder:

There are moments when we need to step forward and say, "yes." I did that not long ago. My daughter is in 8th grade and plays basketball for our school, and they were looking for an assistant coach. I have always wanted to coach my daughter's basketball team, just as my dad did when I was in school. This is my last chance to coach her before she moves into the high school. Did I have time? No. But I could move things around and say "no" to other things so that I could say "yes" to this. So I did. I said yes. And it's crazy and exhausting and I have to remind myself that it's only for a season (literally), but it was a "yes" worth saying.

And because of that "yes" I have said "no" to other things, other commitments, other requests. It was hard to say some of those "no"s.

But here's what I'm pondering. Saying both "yes" and "no" takes courage. It's a clear, decisive commitment one way or the other to something. Will I coach my daughter's basketball team? Yes. Will I take on teaching the extra class at the college for extra travel money? No. Will I accept the dinner invitation? No. Will I drive across town to see a friend, even when I'm exhausted? Yes.

Yet, regardless of the "yes" or "no", the real questions is: Will I be brave?

This past year has been a year when I have pondered being brave. Because when we are brave, we are not allowing ourselves to make decisions out of fear. Fear can be healthy, but I have observed that most decisions made out of fear are the wrong decisions--whether staying in a toxic relationship or running away from a bear (although 1 is decidedly more life-threatening).

The brave decision is often the right decision. Let's be brave, my friends.