Eyes in the Dark: A Loretta Encounter 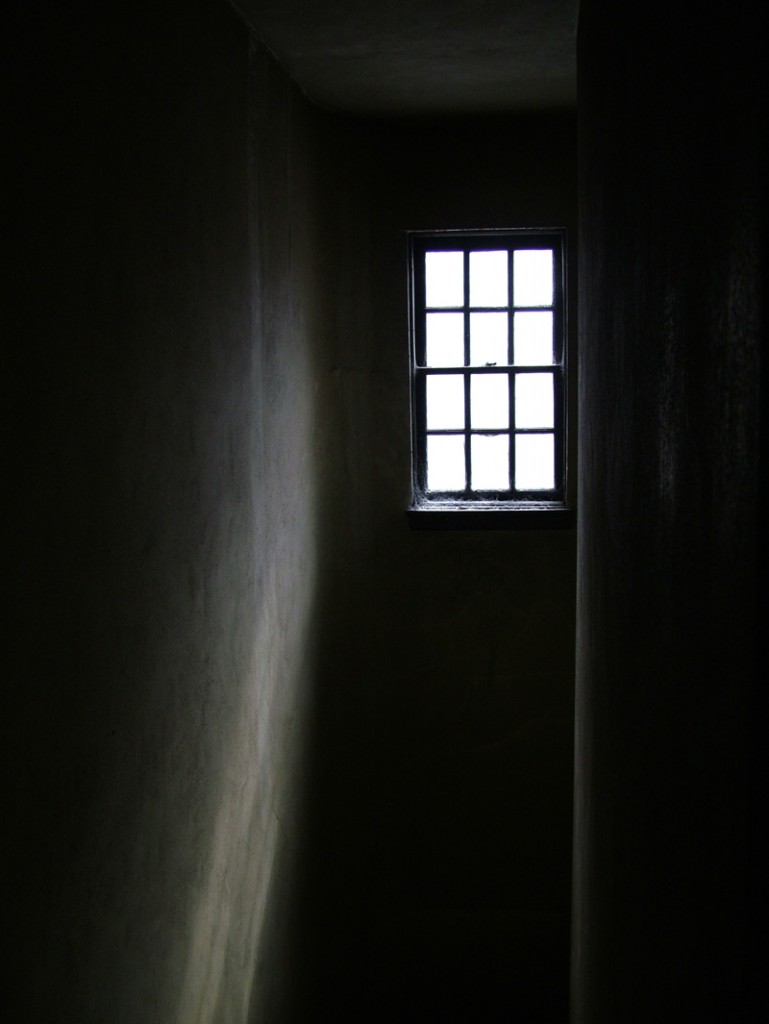 If you read my post about Mary Magdalene, you heard the name Loretta mentioned. (If you didn’t read my previous post, you may want to because it may help some of this to make sense.) Loretta deserves a story/post all to herself despite the brevity of our encounter.

After the debacle of my (and Cassie’s) first experience, for our second experience at being interns (who were afforded no further training or guidance other than the 45 minutes previously received) Gary decided to offer us a reprieve. He took us into the “Fishbowl,” the shatter-proof—and probably bullet-proof—glass enclosure in the middle of the forensic unit. The Fishbowl housed the staff computers and phones, and, through a door in the back, patients’ charts. We followed Gary through the Fishbowl, through the rear door, and into a space about the size of a walk-in closet whose walls were lined with thick pastel binders, each one holding the life-story of a patient.

“Feel free to acquaint yourself,” Gary said and walked back into the Fishbowl.

Cassie and I each pulled random binders from their shelves, and sat down at the two-foot-by-four-foot desk. A narrow metal door with a skinny sliver of a window stood next to the desk at the back-side of the tiny office. We found out later that this led directly into a hallway of patient rooms. The hallway was dark—black as, well, pitch—because it was nap time for many of the patients.

We perused the charts, reading the histories and diagnoses of the residents. Occasionally we would comment or share our findings with each other. Maybe shake our heads at some of the crimes committed or attempted or bungled. Maybe blink away tears at the deplorable conditions some endured as children and even as adults. It is always a shock when what one studies in a textbook suddenly takes on flesh. It stirs empathy. And empathy is a powerful thing.

“Anna.” Cassie whispered, nudging me—we both had been whispering, both feeling that we were surreptitiously reading someone’s diary filled with deep, dark secrets. In a way, we were. I looked at Cassie with interest, thinking she wished to share another of her findings. Instead, she stared past me toward the door with the dark, skinny window. Her eyes were wide, fearful. Slowly, I followed her gaze.

There in the window a pair of white eyes glowed. Surrounding the eyes was dark skin that melded with the dark of the hallway. The black of the irises were the same black as the pupils. Unblinking the eyes stared—bored into us. Neither of us moved. I’m not sure we even breathed.

With excruciating force of will, I reached my hand toward the door. As my fingers neared the handle, the eyes in the window widened to a horrifying width. The pupils dilated. I could just make out a flaring of the nostrils on the broad nose.

I jerked my hand away and hid it behind my back.

“I’m getting Gary,” Cassie said. I felt the warmth of her—the security of another human being standing with me in this terrifying moment—vanish. I was alone. Again.

Neither fight nor flight took hold of me. Instead I froze. Allowed those eyes to pierce deeply, as though reading my soul. My heart pounded in my ears. Cassie was gone only a few seconds, but it felt as though eons passed. Like Frodo slipping on the ring of power, I held my breath and endured the weight of that gaze.

Only when Gary and Cassie entered the office did I finally exhale.

“Oh, Loretta.” Gary said. “She’s supposed to be napping.” He stepped back into the Fishbowl. I wanted to call him back, plead with him to make the eyes go away.

"Loretta?" I said to Cassie, still whispering and unable to calm the tremble in my hands. "The patient who assaults the interns?"

Cassie was silent. We both knew the answer to that question. Seconds later the eyes disappeared.

I never encountered Loretta again. And I would assert that once was assuredly enough. It took me a while to shake off that gaze. We went back to reading charts, visiting with patients, sitting in on group therapy. Only afterward—once my internship was done, my degree earned, and employment procured—when I was elbow deep in psychological disorders and mental illness at my first job, did a realization occur. Those eyes, though terrifying at the time, now serve as a reminder. A reminder I shouldn’t try to shake off. They are a reminder that everyone is fighting some kind of battle. And we all could do with a little kindness. Including Loretta—maybe especially Loretta.* Because it is usually those with whom we struggle to be kind (sometimes those, even, that we fear) are those who need kindness the most.

*just to be clear, the names of Loretta and Gary are fictitious for the sake of confidentiality. Sorry, Cassie, you’re on your own.