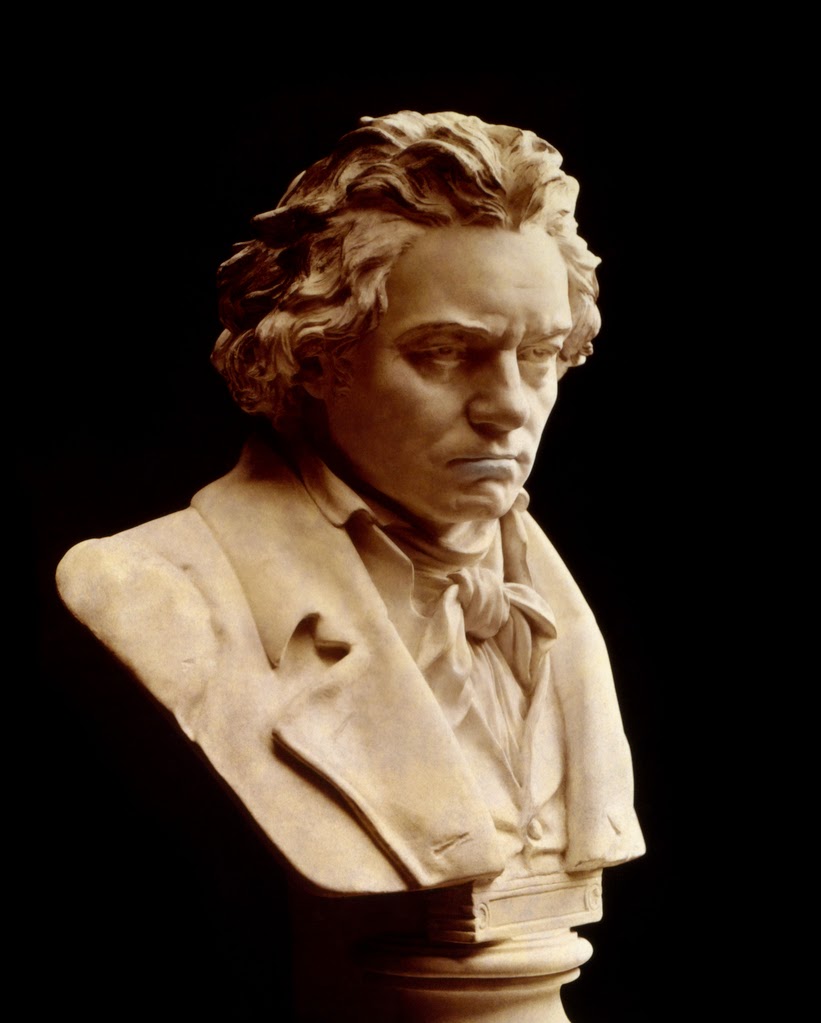 About 2 years ago I was a guest writer on a blog asking me to talk about one of my happiest moments. The moment of "happy" I conveyed was of my experience singing with a chorale Beethoven's Ninth in college at a theater in Chattanooga, TN. (Unfortunately, I believe the link to my post no longer exists, thus I am unable to connect you to that post. Sorry!) That college experience prompted my curiosity in the person of Beethoven, a "mad genius" in some people's minds who created some incredible music. What I find even more incredible is that he wrote his Ninth symphony when he was, it is believed, completely deaf. (He went deaf in 1816. He wrote the Ninth Symphony in 1824.) How did he manage it? He sawed off the legs of his piano, placing it on the floor, and with his ear pressed to the floorboards, he "heard" the vibrations of the music he was working to compose. It is also understood that Beethoven experienced a difficult childhood as a result of his father (a court musician with an alcohol addiction) driving young Ludwig to be perfect in his practice and performances.

It makes me sad to think of Beethoven as a child being treated so badly, driven so relentlessly.

However, as so often happens, great art springs from great difficulty. Would we have Beethoven's Ninth if Beethoven's childhood had been happy? Would he have persisted and fought to overcome his deafness had he not fought early in life to overcome the cruelty of his father? Perhaps Beethoven was eccentric and flirted often with the line between madness and genius. But I'm not sure that any of that matters now. What matters is what was created out of all of that. What we are left with is, in my humble opinion, some of the most beautiful and impassioned music the world has ever encountered.

Beethoven himself hopefully serves as a reminder that no experience--however painful--needs to be wasted. No scars we receive condemn us to future scarring. We are who we are as a result of all we experience, and it's precisely that which informs what we create.

So, as National Poetry Month winds down, I want to share a poem about Beethoven - his childhood, his music, his genius, his persistence. It's a Spoken Word poem by Shane Koyczan, so it's supposed to be heard rather than read. However, it's always helpful for me to see the words in addition to hearing them. So the poem and a video of Shane performing his piece is below.

I hope you enjoy:

where mercy had to be earned
through each perfect note
tumbling up through the roof
to tickle the toes of angels
whose harps
couldn't hold half the passion
that was held in the hands
of a young boy
who was hard of hearing
Beethoven
who heard
his father's anthem
every time he put finger
to ivory
it was not good enough
so he played slowly
not good enough
so he played softly
not good enough
so he played strongly
and when he could play no more
when his fingers cramped up
into the gnarled roots of tree trunks
it was
not good enough
Beethoven
a musician
without his most precious tool
his eardrums
could no longer pound out rhythms
for the symphonies playing in his mind
he couldn't hear the audiences clapping
couldn't hear the people loving him
couldn't hear the women in the front row whispering
Beethoven
as they let the music
invade their nervous system
like an armada marching through
firing cannonballs
detonating every molecule in their bodies
into explosions of heavenly sensation
each note
leaving track marks
over every inch of their bodies
making them ache
for one more hit
he was an addiction
and kings/queens
it didn't matter
the man got down on his knees
for no one
but amputated the legs of his piano
so he could feel the vibrations
through the floor
the man got down on his knees
for music
and when the orchestra played his symphonies
it was the echoes of his father's anthems
repeating itself
like a brok-broken recor-brok-broken record
it was
not good enough
so they played slowly
not good enough
so they played softly
not good enough
so they played strongly
not good enough
so they tried to mock the man
make fun of the madness
by mimicking the movements
holding their bows
a quarter of an inch above the strings
not making a sound
it was
perfect
see
the deaf have an intimacy with silence
it's there in their drams
and the musicians turned to one another
not knowing what to make of the man
trying to calculate
the distance between madness and genius
realizing that Beethoven's musical measurements
could take you to distances
reaching past the towers of Babylon
turning solar systems into symbols
that crashed together
causing comets to collide
creating crescendos that were so loud
they shook the constellations
until the stars began to fall from the sky
and it looked like the
entire universe
had begun to cry
distance must be an illusion
the man must be
a genius
Beethoven
his thoughts moving at
the speed of sound
transforming emotion into music
and for a moment
it was like joy
was a tangible thing
like you could touch it
like for the first time
we could watch love and
hate dance together
in a waltz of such precision and beauty
that we finally understood
the history wasn't important
to know the man
all we ever had to do was
listen.